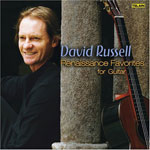 "David Russell is in a class by himself."
American Record Guide

"A phrase played by him [Russell] is a thing of such clarity and direction that it seems almost physically palpable: it is an object of such polish, perfect curvature, and ineluctable sweep that one feels as though one could pick it up and examine it as if it were a sculpture."
American Record Guide

“So while the guitar is not quite the instrument associated with the Renaissance, Russell does not care and neither will the listener.”
Brattleboro Reformer

“Russell, like good wines, gets better with the time, becomes stronger and more perfect.”
Arizona Republic

Although guitarist David Russell's career has been built largely on the Spanish and Latin American music that makes up such a beloved part of his instrument's repertoire, he's often looked back to earlier eras, too, serving up transcriptions of Bach and other Baroque composers on some of his finest recordings.
Here, on his 11th album for Telarc, Russell goes back further still, to the Renaissance, beginning his exploration in the familiar territory of Spain -- a time and place that was central to the guitar's history. He doesn't linger long, however: After setting the 16th-century tone with a trio of works by Alonso Mudarra and Luys de Narvaez, Russell heads to England and the music John Dowland, which comprises the heart of this recital -- well over half of its duration. Dowland's music for lute (which translates with ease to guitar) is a landmark of its time, alternating between poised dances (especially the stately galliards, five of which are heard here) and deeply expressive fantasias. Dowland's famous gift for melancholy is displayed in pieces like Semper Dowland Semper Dolens and the well-known Lachrimae, which inspires one of the most touching performances Russell has ever committed to disc. The beauty of Dowland's works could easily have sustained an entire album, yet the final, Italian segment of the recital is an equal delight. Russell devotes his mastery of tone color to four of Francesco Canova da Milano's fantasias and ricercars, after which the set of popular-style dances by Pietro Paolo Borrono and Joan Ambrosio Dalza bring the guitarist's journey to a relaxed and satisfying conclusion.
Scott Paulin, Barnes & Noble, May 2006

GRAMMY-award winning classical guitarist David Russell takes listeners on a captivating journey back to the Renaissance period with Renaissance Favorites for Guitar. The release marks Russell’s eleventh recording for Telarc and his first comprehensive study of the Renaissance era.
“One of the most significant musical developments of the Renaissance was the evolution of idiomatic instrumental styles and a technical language sufficiently sophisticated to sway the emotions without a sung text,” according to Richard Rodda, author of the recording’s liner notes. “English, Italian, and Spanish composers in the decades around 1600 created an especially rich repertory of works for lute and guitar, instruments highly prized both for cultivated social use and at court. This recital by David Russell captures the spirit of that great age of music through some of its most enduring compositions.”

The recording includes pieces by familiar as well as lesser known composers from the Renaissance era. From the canon of John Dowland, Russell performs “Come Away (Come Again),” “Go From My Window” and “Fantasia,” as well as Dowland’s lesser-known “Semper Dowland Semper Dolens,” “Piper’s Pavan” and “Lady Hunsdon’s Puffe.” Other works include Francesco Canova de Milano’s “Fantasia XIII, VI and XX,” William Byrd’s “The Woods So Wild,” Pietro Paolo Borrono’s “Peschatore che va cantando” and Joan Ambrosio Dalza’s “Piva.”
David Russell is heralded worldwide for his superb musicianship and inspired artistry, having earned the highest praise from audiences and critics alike. In recognition of his great talent and his international acclaim, he was named a Fellow of The Royal Academy of Music in London in 1997. Most recently, Russell received an homage from the music conservatory of Vigo, culminating with the opening of the new Auditorium, to which they gave the name “Auditorio David Russell.” Upon winning a GRAMMY Award in the U.S. for his 2004 Telarc release, Aire Latino (Best Instrumental Soloist in Classical Music), Russell received the silver medal of Nigrán from the town in Spain where he resides.

For an incredible collection of Renaissance music, take note of David Russell’s Renaissance Favorites for Guitar.