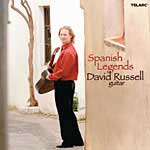 These 65 minutes of solo guitar playing--handsomely, intimately recorded--are a pleasure to listen to. Russell is a true virtuoso, playing with an ease and assurance which gives the recital the great subtle, variety it should have. He's equally at home with the catchy, playful "Zapateado" by De La Maza that opens the program as he is with Llobet's lyrical, singable, relaxed "El testament d'Amelia." The beautiful, lullaby-like "La filla del Marxant" (also by Llobet) is as smooth as silk, and the four pieces by Andres Segovia have a flavor all their own. The downright odd, but alluringly discordant "El Abejorro" by Pujol will enchant and puzzle you. The program is songlike, dancelike, familiar and new-sounding, and Russell's graceful way with each style is ideal. Every note, every delicate harmonic, is audible and important, but there's never a sense of underlining either a melodic or rhythmic phrase. Russsell lets the music, diverse and fascinating, speak for itself. A must for those who love the classical guitar, especially with a Spanish flavor.
Robert Levine

David Russell’s new CD is a generous, 65-minute collection of gem-like pieces written by Spanish composers Regino Sainz de la Maza, Miguel Llobet, Andrés Segovia, and Emilio Pujol during the early part of the 20th century. Suffused with the rhythms and romance of Spanish music, these arrangements are influenced by regional Castilian, Andalusian, and traditional Catalan folk songs. Works like Llobet’s “El Testament D’Amelia” and “Scherzo-Vals” will be recognized by any classical guitar aficionado. However, Russell’s performances, at once inspiring and accessible, make you hear them as if for the first time. His playing is fluid, sparkling, and effortless, infused with the warmth and genuine affection he obviously feels for these pieces.
Julia Crowe