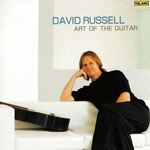 Some of the best known guitar pieces
2007 Telarc International - 80672

“...over sixty-six minutes of stunning guitar played by this true master.”
Fingerstyle Guitar

“This is magnificent…Russell is a god of the guitar, a supreme musician with an impeccable technique, a glorious tone, and profound expressiveness. His work is always moving, but this is among the best work he’s ever done.”
American Record Guide

“…an exceptional CD of its kind.”
Keene Sentinel

“…supreme musicianship supported by immaculate technique…Without doubt, another outstanding release from a true artist of the guitar.”
Gramophone

“He holds each work like a bird in the hand, releasing the distinctive sonorities of each and then returning to an overall trajectory… The overall effect is absolutely entrancing.”
All Music Guide

“Russell's concert flows from selection to selection with the same polish and expert phrasing that is shown in all his performances.”
Audiophile Audition

“…all in all I see this as an exceptional CD of its kind.”
Sentinel Source

GRAMMY Award winning guitarist David Russell is a world-class musician who has spent a lifetime performing and recording the works of many composers who have written for guitar as well as transcribing other works for guitar. Not one to rest on his laurels, the virtuoso continues his long and prolific relationship with Telarc with the March 27, 2007, release of Art of the Guitar.
“A phrase played by [David Russell] is a thing of such clarity and direction that it seems almost physically palpable,” hailed American Record Guide, “It is an object of such polish, perfect curvature, and ineluctable sweep that one feels as though one could pick it up and examine it as if it were a sculpture."
Art of the Guitar features selections from the traditional Spanish repertory as well as original works by composers from Latin America, Hungary and England, and arrangements of works by Norway’s Edvard Grieg and France’s Claude Debussy. “This collection of pieces has been a part of my repertoire for many years,” says Russell. “I am happy to finally find a home for them on this recording.”
Staying true to his roots in the Spanish idiom, Russell explores Julián Arcas’ Fantasia on Themes from Verdi’s La Traviata, a work from a composer whose early life is shrouded in mystery, but who gained critical acclaim in England during the 1860s. He later returned to his native Almería where he opened a music shop and collaborated with the eminent guitar-maker Antonio de Torres of Seville on improving the instrument.
As a rebellious teenager, composer Vincent Villa-Lobos ran away from home and performed with the street musicians of Rio de Janeiro known as chôros. The style of Brazilian music had an indelible effect on him, so much so that he created a new concert genre known as Chôros. Art of the Guitar features Villa-Lobos’ preludes No. 1 & 2.
Straying a bit from the norm, Russell includes English film and TV composer Stanley Myers’ bittersweet “Cavatina” from The Deer Hunter. Continuing through the recital, Russell plays five of the sixty-six Lyric Pieces of Grieg. These pieces are rooted in the songs, dances and, spirit of Norway, and are a testament to Grieg’s commitment to composition even during his rapidly growing renown as a winning teacher, pianist and conductor of the Philharmonic Society in Oslo. Grieg later finished this work after resigning his positions in Oslo in order to compose, tour, and attend to his frail health.
The 24 Debussy Préludes “are the quintessential examples of [Debussy’s] ability to evoke moods, memories and images that are at once too specific and too vague for mere words,” says Richard E. Rodda in the CD liner notes. Russell performs Debussy’s La Fille aux Cheveux de Lin (The Girl with Flaxen Hair) from Book 1 with the great delicacy needed to tell this story of a young Scottish girl singing in the morning sunshine of her simple, unaffected love.
Other works featured on Art of the Guitar are Uruguayan composer Abel Carlevaro’s “Campo” from Preludios Americanos, Hungarian Johann Kaspar Mertz’ “Fantasie Hongroise,” and the Spanish composer Fernando Sor’s Variations on a Theme by Mozart which supposedly borrows from the chorus Das Klinget So Herrlich in the Act I finale of Mozart’s opera The Magic Flute, but actually bears little resemblance, as though Sor remembered the tune imperfectly and filled in the many forgotten bits from his own imagination.
Russell’s GRAMMY for his 2005 Telarc recording Aire Latino (Best Instrumental Soloist in Classical Music) prompted the award of the silver medal from the Spanish town of Nigrán, where the Scotland native currently resides. Russell says the GRAMMY Award is “not only a boost in confidence for me and a great recognition for many years in the business, but it is also a wonderful acknowledgment for the guitar.”
Russell continues to enjoy worldwide acclaim for his superb musicianship and inspired artistry – creative strengths that are readily apparent on Art of the Guitar, his twelfth Telarc recording. He will tour the U.S. in the spring of 2007 in support of the new recording.