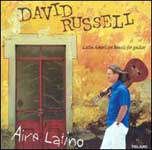 "In the realm of classical guitar, there is a small handful of luminaries whose concerts and recordings have earned them international stature. Scottish-born guitarist David Russell is one of the these rare performing artists who has garnered favor with audiences, guitar aficionados, music critics and concert presenters around the world."
" Russell is a guitarist's guitarist. His playing embodies unforced, thoughtful musicaliy, made possible by an apparently effortless technique - something only a few players ever attain, let alone harness to the ends to which Russell has."
Acoustic Guitar

"...Russell coaxes a magnificent range of colors from his instrument...a charming disc and definitely a keeper."
Billboard

"Russell's program of dances and other short movements by composers like Jorge Morel, Augustin Barrios, Villa-Lobos, and Antonio Lauro is as pristine as any of his recordings of Bach. All is exquisite detail, lustrous tone, and perfectly balanced interpretation."
American Record Guide

"Blessed by the most natural recorded sound, Aire Latino dazzles with the rainbow of sonorities that Russell conjures on his six-string...This is a disc that will charm Latin music lovers as much as classical guitar aficionados."
The Star Ledger