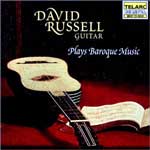 I have always admired the artistry of David Russell and on this recording he has excelled even his own already high standards. The phrasing and voicing flow so naturally from him that it seems so obviously correct and tasteful, yet to achieve it is a gift imparted to so few. Ornamentation is so well articulated as to appear effortless; in fact any difficulties are swept aside so that all that remains is the purity of the music.
In the final analysis everything about this disc radiates quality, the player, the music and the recording are all of the highest calibre and I would go as far as to say that this is the finest guitar recordings of baroque music ever.
Andy Daly, musicweb.uk.net

If you normally shy away from Baroque Guitar music, put on this CD and go immediately to track 15. The martial-flavored opening of Scarlatti's Sonata in D major K.490 immediately grabs the attention, drawing you into its special world with its cascading runs, march cadences, and some surprisingly grinding dissonances. David Russell's brilliant arrangement takes full advantage of the myriad tone colors of his instrument, and his slower, more stately tempo turns this brief work into a miniature tone poem. He's greatly aided by Telarc's warm, vivid recording, which turns your listening area into a small recital hall, with detailed, naturally-voiced upper registers and richly resounding bass notes. I found myself playing this selection repeatedly, and was pleased to discover an entire disc full of riches as I ventured beyond it.
The other eight Scarlatti sonatas are just as beautifully arranged, and listening to Russell's performances never entails that harpsichord fatigue that comes from hearing too many of them at one sitting. The program actually opens with the plangent strains of Loeillet's Suite in G minor, which also began life on the harpsichord--and also benefits from the guitar's warm tones. The Vivaldi B-flat Sonata (originally for cello) and Handel's A minor Sonata, originally for flute and basso continuo, both sound quite natural on their new instrument, thanks to Russell's mastery of each composer's idiom. So there you have it, an easy and irresistible entry into the world of Baroque guitar.
Victor Carr Jr., ClassicsToday.com