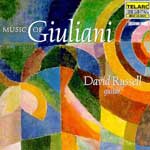 On Music of Giuliani , David Russell, one of the great guitarists of the late 20th century, plays a selection of solo works by one of the great guitarists of the early 19th century. Mauro Giuliani (1781-1829) was deeply involved in many aspects of music throughout his life. He played cello in the premiere of Beethoven's Seventh Symphony, gave lessons to Napoleon's wife, and popularized a method of guitar notation that is still used today. But he is remembered today for his compositions for guitar.
Russell plays five of Giuliani's solo pieces with his usual blend of intelligence and musicality. He never lets his formidable technique overpower the music. On Rossiniana No.1, part of a fantasy based on arias from Rossini's operas, Russell plays with a lyricism that is deeply emotional without being histrionic. Russell has a rare gift: he is able to make a guitar sing.
Michael Simmons

There is very little classical music specifically written for guitar, its repertoire consisting mostly of arrangements. However, Mauro Giuliani, known as the "Paganini of the Guitar," left a beautiful body of work for this neglected instrument. Written at the start of the 19th Century, they blend Italian style with Austrian keyboard technique.
This fascinating fusion stems from the Italian composer's move to Vienna early in his career. Whereas Italy was lacking in opportunity, Austrians admired Giuliani's new sound. His Sonata in C, with its overtly piano-styled texture, won acclaim throughout the music community. Ingenious in the depth of its structure, it set Giuliani's career on fire. His most popular piece, the Grande Ouverture in A, shares similar patterns.
This recording highlights the joy and festive nature of Giuliani's work. Yet even as its emotions peak, one cannot help but marvel at the refined structure. Guitarist David Russell's technique is exceptionally smooth, benefiting from Giuliani's understanding of the instrument's limits. Russell's authoritative touch is firm, yet delicate. It is a world class recording of exceptional compositions.
arkivmusic.com