I would like to tell you about a concert I did last night.

At the moment I'm on tour sponsored by the British Council, the first half being solo recitals in the Philippines and Indonesia.

Yesterday's concert was the fourth of the trip, and it was on the island of Palawan, a long narrow island in the southwest extreme of the Philippine archipelago. 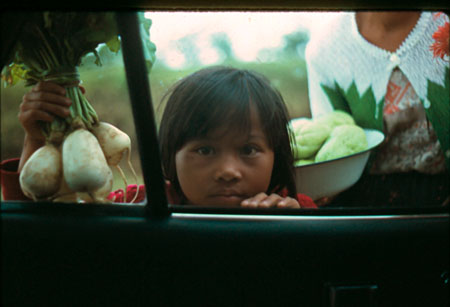 It is almost entirely covered with tropical jungle and has hardly been touched by western civilization, except for a couple of coastal villages. Near the main town, Puerto Princess, there is a small airport and next to that is the Vietnamese refugee camp. This is where Beryl Braithwaite of the British Council was bringing me to play.

As we came off the airplane we were met by a group of Vietnamese. Two beautiful girls in traditional dress came and put flowers round my neck, led me to a jeep and we all headed off to the refugee village. When I got out of the jeep, I was surrounded by hundreds of children of all ages - the smaller ones were tapping my guitar case and laughing, saying all sorts of things to me. 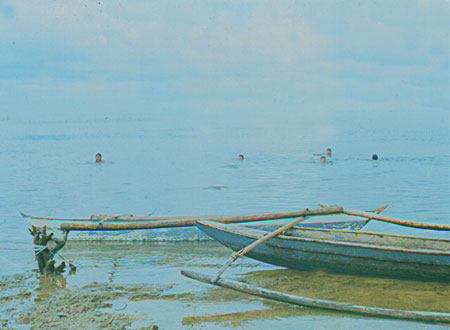 A VIEW OF THE REFUGEE CAMP

SWIMMING WITH THE CHILDREN

The only word I picked out was 'guitarist'. They had learnt some words from the two British volunteers, Lesley Morris and Muriel Knox, who teach English and whatever other skills the refugees need to learn for their future resettlement in the west.

The village is mostly made of bamboo and raffia huts with thatched roofs, mostly of a brownish colour. It is built on the edge of the sea, protected from storms by a coral reef and surrounded by palm trees and other tropical vegetation. At the entrance to the village there are several small churches, all next to each other, one for each religion. The whole place is very clean, considering the amount of people in such a small area. 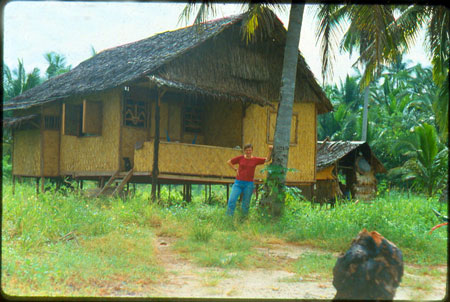 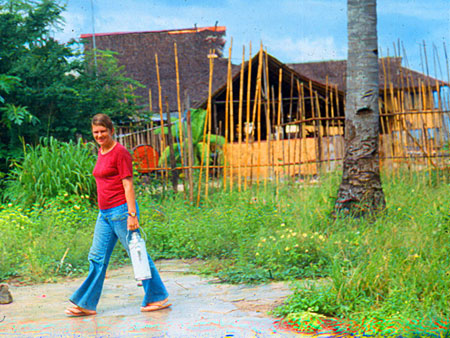 My escort of chattering children took me along the main street to the square where there was a stage set up at one end. Not long after I got there the rain came pouring down, as it does most evenings, in torrents. I had seen heavy rain, but the rain in Europe bears no comparison to tropical rain.

The storm went as fast as it arrived, just before sundown, having caused havoc with the lighting and amplification (borrowed from the Philippine army). Everything seemed to get fused and everybody seemed to know what to do, so while they ran around rewiring the loudspeakers I had a chance to walk about the camp and talk with some of the Vietnamese about their journeys from home or about life in the camp. (Some of the older people spoke French and the younger ones spoke some English)

The thought kept coming to my mind that these were just the survivors. Everyone had a story of adventure to tell, about all the terrible dangers involved in crossing the ocean in a small fishing boat, the dangers of thirst, hunger, the sun, the storms, and not least the pirates. They have risked everything for a new life.

The evening was warm, the rain had stopped, and it promised to be a perfect night with a full moon rising up from the sea. As long as nobody got electrocuted dropping live wires in the puddles left by the downpour, we would start soon.

After an introduction in Vietnamese and some National anthems (on cassette tape) I got started. I had no idea what to expect from the audience, everything was so strange. There was a sea of heads spread all around, several thousand people all standing, except where there were a couple of chairs in front for the dignitaries. Beside and behind me on stage there were some children who had climbed up to see better. They sat on their haunches in complete silence while I played.

I was amazed that they all listened to the music with just as much attention as a London audience and showed their appreciation more warmly. Every person who performs on stage knows that one gets a definite feeling from the public. The public has a collective character, and the artist has to find a means to make contact in a personal way with that character.

As I played, I watched their faces being happy with a happy piece of music, and look melancholic with the sadder music.
It was wonderful encouragement to enjoy one's own music-making and get away from all the little worries we have about our playing, such as being nervous in case you forget, or, "the sound is not as good as it was yesterday" etc.. Everybody laughed at one point when a big jungle beetle flew into the light (through the mosquitos) then slapped into my side. I had to stop, and jumped up to brush it away, as I wasn't going to continue with that thing crawling into my armpit.

For sheer contrast, I remember only a little over a week ago I played in New York. I enjoyed that concert also, but for absolutely different reasons. Why I was playing was different, why the public was there, how they appreciated it, the music critics, the guitar world where making mistakes is a sin. All different.

I must say I was surprised when I walked off stage and two Vietnamese guys asked to see my fingernails. In almost every part of the world there are guitarists worrying about which side of the nail to play with. 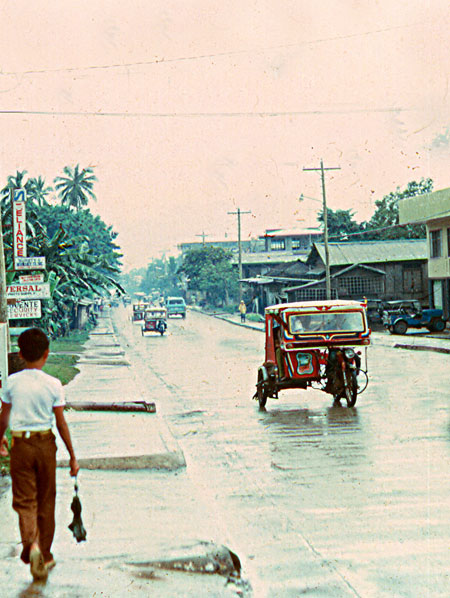 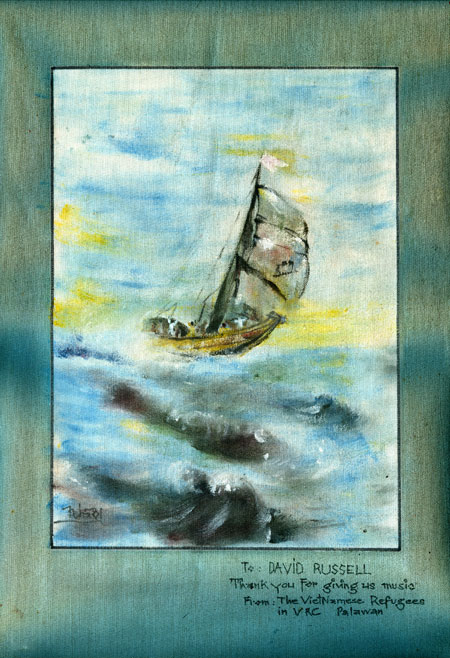 THEY GAVE ME THIS PAINTING AFTER THE CONCERT

After the concert, the vietnamese Mayor of the village gave a lovely speech of thanks, saying how the music had made him forget for a while the problems he and his people face. There then followed a lot of confusion, getting flowers, and clapping, more flowers round my neck, people milling round on stage and shaking my hand, till someone put my guitar in my hands and sat me down to play some more. This continued until I started to run out of steam and Muriel Knox of the volunteer services came to my rescue and brought the evening to a close.

This was the most worthwhile concert I have ever done. Not in terms of career, or finaficial gain, nor promotion of guitar music, but in terms of true worth it has left me with an incomparable memory.