This is the Blue Room in the city hall of Alicante. 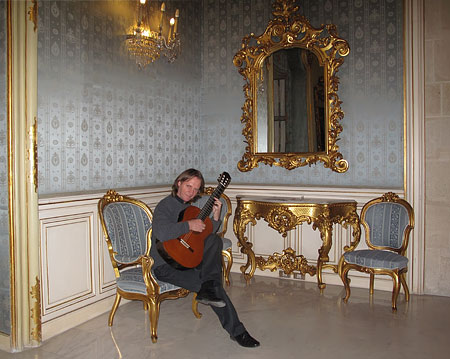 In January 2013 a master in Classical Guitar Performance started in Alicante. I was the first teacher of a series of eight in total, who will be giving their lessons to the enrolled students during the next six months.

This initiative is expected to continue for many years to come. It is an intensive period for the students, who will have many hours with each of the teachers. They will also have the  opportunity to play some concerts in the area.

The city of Alicante has been transformed since the time I studied there. The city center is vibrant, full of restaurants and the beaches are nearby. Like in most Spanish cities, there is intense life outdoors.

Being back in Alicante brought back wonderful memories of my years as a student here.

The students, here in the photo during a warm up session in the morning, come from nine different countries. The atmosphere of the first week was fantastic. I enjoyed the time I had with them and hope that they benefit enormously from this experience.

The inauguration of the course was attended by many dignitaries, including the mayoress and the dean of the university, as well as master guitar maker José Romanillos, here in the photo. Ignacio Rodes and I played some duets to liven up the event. The following night I played a solo recital to initiate the master course.

A monumental delicious paella, which we enjoyed together with the instigators of the masters of guitar at the university of Alicante. For those interested, here is the web page where you can find more information about this six month long course
http://www.master-guitar-alicante.com/index.html
In the photo, amongst others, Romanillos and his wife and conductor José de Eusebio.

Early in the morning in Alicante, on my way to teach the guitar students. I studied in this city with José Tomás and I have always loved being here. In the photo below, some of the students together with the mayoress and others. We are really happy that all the institutions of the city have supported this initiative with such vigor, making it a sure success.

I played for some children, most of them music students. It was nice to share with them music and anecdotes.

Our time in Alicante was such fun that we are already looking forward to going back next year.