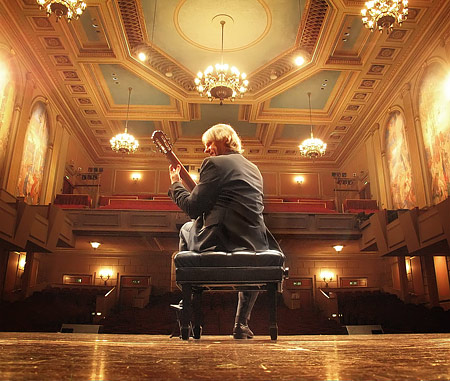 During the 20th century, specialization became a powerful force, and the musical world was not exempt. Young musicians were encouraged to choose between either composition or performance as a focus for their careers, in spite of the fact that composers of previous eras, from Bach to Bartók, were often formidable performing musicians whose expertise as instrumentalists had a stimulating effect on their creativity. On Saturday, guitarist David Russell made a case for an alternative approach in a program of the music of five composers — Mauro Giuliani, Domenico Scarlatti, Enrique Granados, François Couperin, and Sergio Assad — all of them inspired by their own instrumental eloquence and virtuosity. The program was presented by the Omni Foundation and San Francisco Performances and drew a large, enthusiastic audience.

Mauro Giuliani began his career in Vienna in the early 1800s at the height of the classical era. He was a brilliant virtuoso on the guitar and established a reputation as a composer with a masterful sonata as well as the first concerto ever written for the instrument. In 1819 Giuliani left Vienna for Italy, where he became enamored of the music of opera composer Gioachino Rossini and wrote a series of six fantasias for guitar solo based on airs from his operas and titled them Rossiniane. David Russell’s performance of Rossiniana No.3 highlighted the music’s drama, pathos, humor, and ebullient good spirits in turn and handled the lavish cornucopia of musical material with mastery and an easy grace.

Domenico Scarlatti was an exceptional harpsichordist greatly influenced as a composer by the Spanish guitar. Russell told the audience that Scarlatti’s Sonatas K. 490 and 491 are depictions of Holy Week in Spain. The Sonata K. 490 is reminiscent of a processions of pilgrims commemorating the events of Christ’s Passion and resurrection, to the accompaniment of drums that beat a somber rhythm. The Sonata K. 491 portrays a subsequent celebratory dance. Russell captured a portrait of the pilgrims’ improvisatory vocal exclamations in a free and passionate cantilena and the drum accompaniment with rhythmically precise, repeated chords. He filled the celebratory dance with a sparkling exuberance and flashes of instrumental color.

He handled the lavish cornucopia of musical material with mastery and an easy grace.

Russell is not only an elegant musician but also a technician of the highest order. His arrangement of Enrique Granados’ Valses poéticos is the most difficult I have ever seen. The introduction, reminiscent of a vibrant Scarlatti sonata, suffered somewhat on this occasion with passagework marred by rhythmic discontinuities, but the subsequent Vals Noble was full of character and rhythmic subtlety, the Vals Lento profoundly tragic, the Allegro Humoristico mercurial, the Quasi ad Libitum sentimental, and the concluding Vivo breathtaking.

Russell has long been known as an passionate advocate of little-known Baroque music, and his performance of François Couperin’s Vingt-Sixiéme Ordre was both poised and stylish. Couperin was a master harpsichordist, much admired by Bach, who wrote distinctive melodies that were beautifully embellished by Russell with refined cross-string ornamentation. Each of the colorfully titled movements — “La Convalescente,” “La Sophie,” “L’epineuse,” and “La Pantomime” — was characterized by rhythmic precision and sensitivity.

His enthusiasm, beautiful tone, rhythmic liveliness, and unassuming virtuosity make him the ideal champion of the work.

The highlight of the evening was the San Francisco premiere of Sandy’s Portrait, a new piece by Sergio Assad. Named for Dr. Sanford Bolton, an enthusiastic classical guitarist and philanthropist, this is is a three-movement work based on a theme derived from the name Sandy. The first movement is an improvisatory prelude, the second a passacaille, and the last a toccata with a strong Brazilian flavor. All feature Assad’s trademark lyricism, love of life, and an easy idiomatic style based on years of practical experience on the stages of the world. David Russell took evident pleasure in telling the audience about the commission; his enthusiasm, beautiful tone, rhythmic liveliness, and unassuming virtuosity make him the ideal champion of the work. Afterward, he called the composer to the stage for an embrace and an ovation from the appreciative crowd.

Although Russell is not a composer, he was sufficiently inspired by his Scottish heritage to bring forward several of his own arrangements of Celtic music. His version of “Spatter the Dew” and an arrangement of “My Gentle Harp,” by English guitarist Gerald Garcia, brought the recital to a lovely conclusion. His first encore continued the mood with “The Bonnie, Bonnie Banks of Loch Lomond,” dedicated to the memory of world-renowned luthier John Gilbert, a Bay Area resident and close friend of Russell, who died earlier this year.