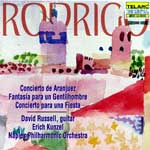 "The phrasing is invariably excellent, and as always with this musician one is aware of just how much our perception of the guitar is related to its affinity with the human voice. It is one of the secrets of David Russell's success, and it illuminates every work he plays.
These remarks apply also to the Fantasia, where soloist and orchestra capture the spirit of ancient Spain to perfection. The Concierto para una Fiesta is occasional music, composed for a Texan in honour of his two daughters. It is none the worse for that, as any professional composer will know: inspiration comes often when one least expects it. If it did not come quite so often, nor so copiously, as in the Aranjuez Concerto, one should not be too surprised: that earlier work was exceptional in many ways.
But the Fiesta Concerto has the essential Rodrigo character and flavour - it could not be by anyone else - and if it lacks the intensity of the Aranjuez's magnificent second movement, it is hardly surprising: one seldom can recapture that first fine careless rapture, etc. As seems to be normal in 3-movement guitar works, the second movement sounds the best, with its thoughtful use of orchestral colour (including the hopeful presence of the cor anglais) to balance the guitar's melancholy phrases. Russell plays this quite beautifully, his own brand of vocalismo investing Rodrigo's melody with an unexpected Liedlike quality.
The interchange of scales between soloist and orchestra (I must admit that its significance escapes me) sounds less perfunctory than it might be in less experienced hands. The quality of the orchestral playing is high throughout, and is a prominent factor in the overall success of this fine issue. The balance is of an excellence rarely achieved in the concert hall, even in these days of hi-fi amplifiers and graphic equalizers."
Colin Cooper, Classical Guitar

The new disc clearly demonstrates that Russell understands what to do with Rodrigo’s music. Though the Aranjuez and Gentilhombre have been recorded by numerous guitarists, Russell brings something personal to the works. Throughout, his playing is precise, emotive and relaxed, each phrase is well thought out.
His rapport with conductor Eric Kunzel and the Naples [Florida] Philharmonic is flawless as is the 20-bit CD’s sumptuous sound. Russell’s guitar is not unnaturally large in the mix but is right on top so the many nuances in his playing are heard.
Mark L. Small