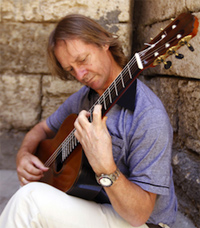 It’s easy to understand why David Russell gets invited back, season after season, to grace the Omni Foundation for the Performing Arts’ showcase of guitar virtuosity with his masterful yet regardful approach to the instrument and a broad range of its repertoire.

Between his musical offerings, the 60-year-old Russell remains a crowd-pleaser, with his Scottish brogue and modest demeanor. His genuine humanitarianism has extended from his support of music programs in his adopted country of Spain (where a street and an auditorium have been named for him) to West Africa, where he’s funded several wells. His professional achievements include being named a Fellow of the Royal Academy of Music in London in 1997, winning a Grammy as best classical instrumental soloist in 2005, and being named an honorary member of the Spanish Amigos de la Guitarra in 2009. He spoke with SFCV by phone from his home, a few days before embarking on the American tour that will bring him to the Community Music Center on March 1 and Herbst Theatre on March 2.

You’re calling from Spain, but you certainly don’t sound Spanish.

Well, I was born in Scotland, and my family all speak Scottish, so that’s the way. I was about 6 when we moved to Spain, and, of course, the only English I spoke was at home. But if people hear me speak on the telephone in Spain, they think I’m Spanish. Until they see me, because I don’t look Spanish.

Why did your family go to Spain?

My parents, William Russell and Ann Meade (they’re separate from a long time ago), were both painters, and they really wanted to have more Mediterranean light, for inspiration. And also a kind of adventure, I suppose: They were young parents with three kids then, so we all piled into a van and drove around France and eventually reached Minorca [a Spanish island in the Mediterranean], and they loved it, so we just stayed.

Are you still based there?

No, my wife [Maria Jesús Rodriguez, also his sometime producer and personal assistant and a guitarist herself] is from Galicia, which is the northwest corner of Spain, so I live here in Nigrán, pretty near Santiago de Compostela.

The name of Galicia links to a Celtic connection, doesn’t it?

Yes! And the music here sounds kind of Irish and Scottish, really, and they still have bagpipes as their own “national” instrument, as well. Some of the place names stayed with the old [Celtic] terms, before the Romans came. And when I play Celtic music, they always love it, because they feel it’s their own.

So despite your worldwide touring and recording for Telarc, you get to play at home?

Oh, yeah. Two days ago, a group of us opened an NGO [nongovernmental organization], a kind of poorhouse for the “new poor,” where they can get a sandwich. And I played, instead of giving a speech. And I play big concerts here maybe once a year.

Did growing up in Spain influence your choice of guitar?

Perhaps, but my father is an amateur guitarist, and he really taught me. And he had a really good collection of Andrés Segovia records; that’s what we listened to when I was a child; I grew up with that and other classical music. But when we first moved to Spain, the folk music here was very alive. You heard Spanish folk music all the time — and that was really the roots of a lot of the classical guitar repertoire. Here, the guitar is the national instrument, like the bagpipes in Scotland; they treasure it. In all towns there are teachers; many children learn to play guitar, much more than in other countries. As a guitarist, you’re not viewed as an oddity.

But when you were a boy, you left to study.

At that time, it was still Franco’s Spain; it wasn’t easy for foreigners to get a grant to study. I moved to Scotland when I was about 14. I lived for a bit with my grandmother, and Ron Moore, a jazz player in Scotland, showed me how to read music and taught me some of the basic things, although he was a jazzer. After that I moved to London and went to study at the Royal Academy. I was 16.

What was the status of classical guitar in London in 1969?

It wasn’t very good, but at that time I was too young to know what was going on! I was into my own thing, and practicing like crazy. It took quite a while for the guitar to become a respected instrument in an institution like the Royal Academy. But we had one big advantage in London, in that both Julian Bream and John Williams lived there. Both of them were incredible guitarists, and they were my idols. They really made the guitar be as respected as any other instrument, up to a point.

What else needed to happen for the guitar?

The general standard had to be raised. My generation, once we were in college, everybody had to work harder and be as good as the pianist next door. By now, it’s changed. If you go to the San Francisco Conservatory or the University of Arizona, you have fantastic students on guitar whom other players won’t see as duffers. You heard Spanish folk music all the time — and that was really the roots of a lot of the classical guitar repertoire.

One sign of change was an increase in the number of guitar competitions, several of which you notched on your belt, including the Segovia, the Ramirez, and the Tárrega.

When I did competitions, in the mid-’70s, I began making enough money out of one competition to live for six months. You didn’t have to scrape around as a student and teach at four schools. You could dedicate yourself to practice. You also had a calling card to say, “I’m so-and-so and I won this competition.” And I made lots of friends and contacts, meeting other members of my generation who were fighting for the same things I was.

How did that networking benefit you?

At that time, we didn’t have Internet, so to know what people were learning in Russia, you had to meet the Russians. You’d meet players who had repertoire we’d never seen in London, and vice versa. Also, some of those colleagues are now head teachers at such-and-such university who can book you at concerts, and you can go and visit them.

Does it take the same kind of stuff to win a guitar competition as an event for piano or strings?

I think it’s similar. But what it takes to enchant an audience, is that the same thing it takes to win a competition? Perhaps not. I know a lot of people that are never going to do well in competitions, even though they play really beautifully.

A guitar buff I know says that, with you, the music comes through and doesn’t get trumped by personality. Would you agree?

I aim to help my listener really enjoy and see the same things that I see in the music, then I’m happy.

How do you apply different techniques to different composers?

It’s more that there are different techniques for different styles of music. Last year I was playing a lute suite by Weiss [early 18th century], so I used a certain kind of technique — I don’t want to imitate the lute, but it was sort of “vague Baroque.” This year [and in San Francisco] I’m playing a suite by Couperin which is very unvague; it’s clear, and the ornamentation is very crisp, completely different from the Weiss; the actual plucking technique is different. It will be much clearer, while the other is cloudy, more mysterious.

With the Couperin, will the ornamentation in Russell’s transcription be Russell?

I would love to do all the ornamentation Couperin suggested in his score, but there are certain things that don’t fit the guitar, so I had to choose. I do a lot of ornamentation on two strings, so you get a trill that’s much closer to what he would have heard on his instrument [the harpsichord].

How much else of your Herbst program will be your transcriptions?

I always do my own, even though other people do beautiful transcriptions. You have to decide what part of the harmony is gonna tell what the whole harmony is. The Granados, the Valses Poéticos, is a beautiful cycle of waltzes, and it sounds fine on the guitar; you don’t have to lose too many notes. I’m also playing some Scarlatti.

Does transcribing the Granados make him sound even more Spanish?Sometimes it feels like he wanted to be a guitarist.

[Chuckles] That’s right! Some of his pieces fit so well on guitar, and it’s true that he probably had both Tárrega and Llobet in Barcelona who transcribed some of his pieces. You can hear that both Albéniz and Granados were searching for sounds that were more guitaristic than pianistic, though not in all their pieces.

When you put together a program like that at Herbst, is there a particular template?

You put something at first which is a mixture between what I think is gonna be right for the audience and what I think is gonna feel good for me. [In this case, Mauro Giuliani’s Rossiniana, No. 3.] And I’m playing a new piece by Sergio Assad, called Sandy’s Portrait. (Sergio lives half his time in San Francisco.) It’s a piece I asked him to do for Sandy Bolton, a donor to the guitar department at the University of Arizona in Tucson [where Russell has been in residence at the School of Music]. What better than to have Sergio write his portrait, musically? Though he died last year before he could hear it, unfortunately. Sergio has used the letters in Sandy’s name as the essence of the melody.

Is it special for you to come to the Bay Area?

A place just south of San Francisco, Saratoga, was the first concert I played in the United States. And for many years I used guitars by a man named John Gilbert, who was from San Francisco. I often stayed at his house, and I love the city and the place. [Gilbert, a famed luthier, died a year ago.]

Anyone else besides Sergio Assad composing for you?

Oh, yeah. Last year I had a piece by a French-Canadian guy, Patrick Roux, and the previous year one by [Welsh composer] Steve Goss, who’s writing another one for next year. It’s always a risk: When you ask someone to write something, you’re never really sure if you’re gonna like it, in the end. But with Sergio, it’s pretty sure.

And there’ll be a Celtic element in the Herbst program, following his piece?

I’ll finish with a little set of a few pieces — my arrangements of songs and dances from Scotland and Ireland. I play one slip-jig, that’s in 9/8 [time], and a kind of a dirge, called My Gentle Harp. But it’s really a beautiful tune.

Jeff Kaliss has written about opera and other classical forms for the Marin Independent-Journal and The Oakland Tribune. He is based in San Francisco, and also covers jazz, world music, country, rock, film, theater, and other entertainment. The second edition of his authorized biography of Sly & the Family Stone was published by Backbeat Books.