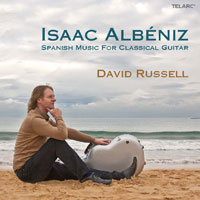 David Russell, recognized for his "evident mastery" of the Spanish guitar repertoire, releases a new album featuring distinctive works by master Isaac Albéniz. With movements from the critically-acclaimed Doce Piezas Caracteristicas and the picturesque Cantos de España to enchanting, Gypsy-inspired dances like the Zambra Granadina, the album celebrates the best of Albéniz' oeuvre, including works originally composed for other instruments.

"The magic in Albeniz' Spanish melodies is unsurpassed. Many of his pieces sound so good on the guitar that it is amazing that they were not written for our instrument," says Russell. "I am sure that he had the sound of the guitar in the back of his mind, while he was writing them."

The Suite Española No. 1 of 1886 is among the earliest of Albéniz's characteristic compositions. He wrote that Granada, composed during a visit to that southern city, is "a Serenata, romantic to the point of paroxysm and sad to the point of despair, among the aroma of flowers, the shade of the cypresses, and the snow of the Sierra.... I want the Arabic Granada, that which is all art, which is all that seems to me beauty and emotion." Albéniz composed the seven musical postcards of his Recuerdos de Viaje ("Souvenirs of a Journey") in Madrid in 1886-1887 in the styles of traditional Spanish dances. Rumores de la Caleta ("Murmurs of La Caleta"), which refers to the popular beach in the historic center of the ancient city of Cádiz, is modeled on the malagueña, a gently swaying dance that originated in Málaga.

"… Here David Russell adds a new layer to our perception of Albéniz with a superb recording, rich in interpretative insight and sumptuousness of tone production. The artist's upbringing and adult life in Spain, his intimate knowledge of Iberian culture, language, and music, are impeccable credentials for a mature reading of Albéniz's intricate texts…
… This recording is so magnificent that it would be invidious to point out its highest peaks - there are so many of them. Every composition is splendidly polished and honed till it shines and each one represents the reflective and touching nature of Spanish art…
… Russell performance sets new levels by which to appreciate Albéniz. In so many ways he brings Segovia's concepts of the composer to mind and builds securely on the Maestro's personification of utter Spanishness of approach. In the process Russell achieves a remarkable transition from the older style of performance to that of the twenty-first century without losing a drop of the essential poetry. Thus the interpretations throughout are at the same time virile and sensitive, strong and subtle.
This recording cannot be recommended too highly. Every guitarist in the world aspiring to enjoy and understand Albéniz should purchase a copy…"
Graham Wade
Classical Guitar Magazine