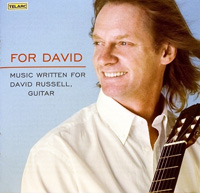 A recording of guitar pieces dedicated to David.
2009 Telarc International - 80707

Award-winning guitarist David Russell has never sounded better than in For David, an engaging program of works that his contemporaries have written for, and dedicated to him. In this choice selection of pieces by Sergio Assad, Francis Kleynjans, Steve Goss, Ben Verdery and Phil Rosheger, Russell shows the traits that have made him world famous, including the precise fingering, solid musicality and incredibly warm, full tone for which his playing is distinguished.
Assad's Aquarelle (watercolor) is, like the artist's medium which inspired its name, comprised of colors laid down in deftly applied layers. It is in three movements, a playful Divertimento, a dreamlike waltz titled Valseana, and a thoughtful, intricate Preludio and Toccatina which provide Russell the opportunity to display his nimble finger work.
In Kleynjans' Arabesque en forme de caprice, dedicated to the 19th century Spanish virtuoso Francisco Tárrega, Russell basks in the luxuriant writing of the dramatic middle section and the gently poignant writing of the outer ones utilizing the melody of the older composer's Lagrima (Tear). And this artist relishes the deeply evocative music of Goss' El Llano de los Sueños (The Weeping of Dreams), inspired by the line of Garcia Lorca, “The guitar makes dreams weep.” It is in three movements, Cantiga, Madrugada, and Alborada. In the second, translated “Before the Dawn,” Russell makes much of the luminous imagery of dreams which Lorca's poetry evokes.
Verdery's Now and Ever I and II is based largely on the interval of a minor second (a half-step) which, to the composer's mind, represents the struggle and sorrow of oppressed peoples. It does end optimistically, though, in highly rhythmical writing in the second movement based on repetitive 7/8, 6/8 and 5/8 measures and a wonderful vocally inflected tremolo that Russell performs to perfection.
Finally, the curious title of Rosheger's “Lullaby to Wake Up With” alludes to the composer's claim that its melody, like some of his best compositions, came to him in a dream and he made haste to transcribe it upon awakening. Like “Waltz of the Gypsy,” it has a very attractive lilt. In both pieces, as in “Good Luck Waltz,” which seems to want to break out into a rendition “East Side, West Side” until the composer takes it on a different flight of the imagination, Russell's playing invests Rosheger's writing with a very attractive warmth.
Atlanta Audio Society

The romantic guitar repertory was created almost entirely by the guitarists themselves. The mainstream composers often praised the charms of the instrument while failing to supply it with any music. One of Segovia's greatest accomplishments was to persuade non-guitarists composers to write for the instrument, so we have works from Castelnuovo-Tedesco, Ponce, Rodrigo, Milhaud and the like.
Recently, however, more guitarists have returned to composing (Segovia and his immediate successors spent more time transcribing tan composing ). The works here were all composed by guitarists.
The other link is that each of these works were written for guitarist David Russell. Russell is among the finest of his generation, which is to say one of the finest of all time. The technical, musical and intellectual level of the best player has improved markedly over the past quarter century. Russell has transcendental technique, exquisite taste and profound musicianship. The composers here were happy to exploit all of this in their works.
Sergio Assad's remarkable "Aquarelle" is a three movement piece, each movement based on the same three note motive. From this simple base, Assad has woven a complex set of textures and moods, with only occasional echoes from Brazil. Francis Kleynjans' "Arabesque en forme de Caprice" is a tribute to Tárrega, with meditative outer sections framing an almost violent centrepiece. While it does contain subtle references to "Capricho Árabe" and "Lágrima", it is miles beyond Tárrega's simple salon music. The inspiration for Welsh born Steve Goss' "Weeping of Dreams" is Federico García Lorca's poem "The Six Strings", which has the line "The guitar makes the dreams weep". You won't find any Spanish clichés here. Lorca, after all, speaks to archetypes that extend beyond Iberia. You will find some beautiful, inventive and expressive music here, not quite like any other composer.
For me, the most powerful of these pieces is Ben Verdery's "Now and Ever", a two movement tour de force that he describes as "my musical statement against slavery of any kind". The music grows out of the interval of a half step, used not like Rodrigo as a sort of musical condiment, but more organically. His odd scordatura (G-A-G-A-Asharp-E) allows a variety of unusual harmonic effects, and his driving rhythm and use of asymmetrical rhythms recalls Prokofieff. The second movement is stunning.
After that performance, Philip Rosheger's three puckish pieces are a perfect way to conclude. They are lighter, though no less inventive than the rest of the program and a welcome way to cool down.
... This CD is a treasure.
Keaton. American Record Guide

DAVID RUSSELL'S FOR DAVID
David Russell Records First Disc of Solo Contemporary Works
For David includes compositions by Sergio Assad, Steve Goss, Francis Kleynjans, Phil Rosheger and Ben Verdery
All pieces written for – and dedicated to – the world renowned guitarist
Classical guitarist David Russell, whose career spans three decades and more than a dozen highly acclaimed recordings, is recognized around the world for his superb musicianship and inspired artistry. In his New York debut, The New York Times proclaimed that “Mr. Russell possesses a talent of extraordinary dimension.” Indeed, the breadth and scope of his virtuosity has captured the imagination of not only audiences and listeners, but also the music press and mainstream media.
Though the repertory for classical guitar extends well back into the Renaissance, the instrument continues to inspire a wealth of music from a wide variety of internationally recognized composers, many of them also performers of virtuoso caliber. For David, Russell’s new recording contains some of the finest contemporary works written for, and dedicated to, this brilliant instrumentalist. Composers featured in For David represent a range of cultures and styles. Sergio Assad (Brazil), Francis Kleynjans (France), Benjamin Verdery (United States), Steve Goss (UK) and Philip Rosheger (United States) each contribute compositions that showcase Russell’s stunning virtuosity.
The recording – Russell’s first collection of solo contemporary works – opens with Aquarelle, a piece by Assad that consists of three movements: Divertimento, a fantasy crafted in four sections; Valseana, a gentle and dream-like waltz; and the brief but technically brilliant Preludio.
“Aquarelle is the French word for watercolor,” Assad explains. “The first time I saw a watercolor being painted, I was impressed by the number of techniques employed to spread colors in different textures that give an ethereal look.”
Written in 1986, the piece was Assad’s first attempt at composing for solo guitar. “That same year, I met David Russell at a guitar festival in Israel and showed him the piece,” says the composer. “I had always been impressed by his excellence as a performer, and was very pleased that he promptly decided to include Aquarelle in his repertoire.”
Russell follows Assad’s Aquarelle with Kleynjans’ Arabesque en Forme de Caprice sur le Tombeau de Tárrega, composed in 1988. Arabesque is a musical tribute to the Spanish guitar virtuoso and composer Francisco Tárrega (1852-1909). In a French tradition extending back to the 17th century, the “tombeau” – literally a “tomb” – is a memorial piece in which composers honor deceased colleagues in music.
Goss’ El Llanto de los Sueños (The Weeping of Dreams), a piece in three movements composed in 2007, draws on ideas and imagery of Spanish poet Federico García Lorca (1898-1936). The music suggests a dream-like nostalgia for the Andalusia of the 1920s and early 1930s. The third movement, Alborada, is based on Lorca’s poem Baile, which depicts an old and slightly unhinged Carmen dancing through the streets of Seville at dawn, frightening the inhabitants.
“She is a little deranged and only half remembers the dances of her younger days,” Goss explains. “Her attention flits quickly from one memory to another, and the character of the music darts from mood to mood. Eventually she gives up and starts her final dance, which builds to a frenzied climax.”
Verdery’s Now and Ever is a two-movement work in which the interval of a minor second plays an essential part, appearing at the beginning of the first movement and the end of the second. “The interval in my mind represents the struggle and sorrow of so many repressed peoples throughout the ages,” says Verdery. “The piece is my musical statement against slavery of any kind.”
Now and Ever was written for and dedicated to both Russell and Russell’s wife Maria. “For years, they have been true friends and an inspiration to me both individually and as a couple,” says Verdery.
For David closes with three separate pieces from Rosheger: Waltz No. 7, “Lullaby To Wake Up To” and “Good Luck Waltz.” Like many of his compositions, these three originally came to Rosheger in dreams. “Sometimes I have total recall of the especially clear dreams, and all I have to do is copy them out note for note,” he explains. “For ‘A Lullaby To Wake Up With,’ for example, I dreamed the melody one night in 1991, woke up, got out of bed, and completed the piece in a few hours.”
“The Good Luck Waltz,” Rosheger’s final piece on the album, “was composed at the guitar with David Russell in mind while I was in Venice, California, right before a concert in Santa Monica in August 1993,” he recalls. “I had this sensuous and full-bodied tone, facile technique and warm personality in mind when I wrote it.”
Rosheger first heard Russell perform this piece at the Herbst Theater in San Francisco in 1996. “I dropped it from my repertoire and have not played it since,” says the composer. “Why should I? David does it better! It has become his piece. He made great and satisfying changes, and I like it more his way. So it is with all the music he plays. It sounds as though he always seats himself in the composer’s chair, and does so with passion. What more could one ask?”
Engaging and innovative. Superb technique. Lyricism on a par with inspired poetry. In any discussion of David Russell, it’s difficult to discern where the music ends and the musician begins. Listen to the latest recording by this guitar virtuoso and understand why some of the most talented contemporary composers in the world are eager to craft music For David.