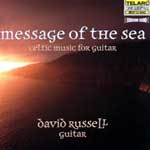 I bought this CD two weeks ago and it hasn't been out of the player the entire time! Every piece is masterfully played; there are no distractions like squeaks or glissandos. Every note is perfect. The selection of pieces is terrific. I recommend this CD highly.
James Tremblay

From the opening track, the blistering Bucks of Oranmore, to the lush title track Message of the Sea, Russell's playing is never less than truly captivating, as always with meticulous attention to detail. Every ornament is crisp and consise, and standard classics like The Bonnie Banks of Loch Lomond sound here as though they were written for the guitar.
Mark Pearson

I bought this after hearing one of the pieces, Farewell to Stromness, on the radio a number of times. These pieces are beautifully played, and David Russell has composed wonderful arrangements of the well-known tunes. Altogether, one of the most beautiful recordings I have heard in a long time.
B. Stafford