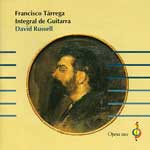 "More than any other guitarist, David Russell understands the art of musical mouth-to-mouth resuscitation. He can breathe new life into an innocent little piece that most of us gave up playing years, decades, even generations ago. Some of Tarrega's pieces come into that category. Russell lavishes his battery of skills on every innocuous phrase, every mundane harmonic progression, as if his life as well as Tarrega's reputation depended on it. It is not sleight of hand - it's all in the music, if you care to look.
Boring performances of Tarrega are the fault of the player, not the composer. (...) a definitive version of his guitar compositions recorded by a master engineer (John Taylor) and performed by, simply, the best man for the job."

This is one of the best CD's I've purchased in the last five years. Not only are all of his works here on two discs, but there are works that I haven't ever found on any other discs.
Notably, the Gran Jota variations are found in this set. These variations comprise of almost 11 minutes of one of the greatest guitar compositons you will ever hear!
Larry C. West